Ferrari turned the tables on its Formula 1 rivals since the summer break, not only taking victories at low-downforce tracks where expectations were high, but also at races where they were expected to be on the backfoot. The result in Russia may not have swung in its direction, but the signs are there that it will be able to fight Mercedes more often at the remaining races this season.

The SF90, with the new higher downforce package, made a big leap forward and while the aerodynamic upgrade will clearly have resulted in some additional drag, it’s been able to exploit superior power unit performance to overcome this and retain a top speed advantage relative to Mercedes.

This came as a blow to the Silver Arrows, whose Spec-3 update has failed to live up to expectations and requires that it operates below its upper thresholds in order to maintain reliability. Ferrari, who already held the trump card in terms of outright power, added more performance with its new specification power unit in Italy and continued to exploit it in the subsequent rounds.

The impressive thing is that it’s been able to unlock performance across the board, giving the upper hand during the race and another marginal boost in performance for qualifying to. Charles Leclerc has reaped the reward of this qualifying boost, taking four pole positions in the last four races, indicating that there’s some margin to be gained from setup and driving style.

The most important factor, and perhaps one that’s being overlooked, is that the aerodynamic update implemented by Ferrari means the team is now able to trigger tire performance in a way it couldn’t before. It appears that the Scuderia was unable to generate enough heat in the front tires before, meaning it had to operate in a much narrower working window, reducing tire performance and lifespan relative to their competitors.

It would also appear that Ferrari’s overall concept, taking into account the change in aerodynamic regulations for 2019, had not accounted for Pirelli’s thinner gauge rubber – the tire supplier reducing the tires tread by 0.4mm, as it did for several rounds in 2018. The updates introduced in Singapore sought to overturn its lower speed weaknesses, but even Ferrari didn’t think the car would respond as well as it actually has to them.

Here are the changes that boosted Ferrari’s form; click on the arrows to scroll through the images…

The update centers on a solution that we’ve seen proliferate the grid since Mercedes first utilized the concept at the start of 2017 – an under-nose cape. In Ferrari’s case it has added their cape to the previous nose structure, doing away with the elongated and slotted wing pillars (inset) in the process. 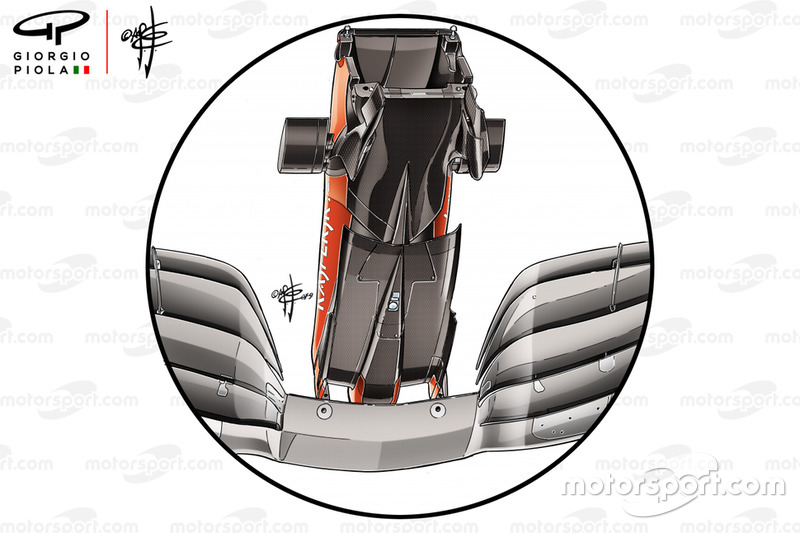 The sled-like structure not only influences the airflow’s path downstream, further amplifying key aerodynamic structures such as the bargeboards, but also repositions the car's aerodynamic center of pressure (CoP), putting it a little more 'on the nose', which is likely aided by the dividing keel under the nose in yaw.

To take advantage of the newfound front-end performance, and to balance and improve flow stability around the rear end of the car, the team stiffened the slots on the edge of the floor, incorporating metal inserts in the areas that are prone to flex. Fluctuations in the slot gaps would have previously led to compromised performance, which in-turn would reduce the effectiveness of the tire squirt slots ahead of the rear tire (highlighted in yellow). 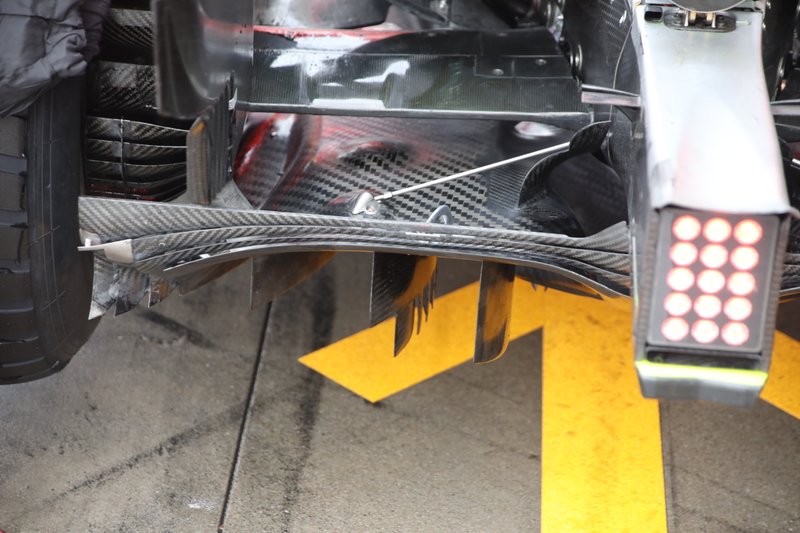 Ferrari also took this as an opportunity to revisit a diffuser development that was tested in France but didn’t deliver the performance uplift that was anticipated. The changes center on the Gurney-style flaps that populate the periphery of the upper and outer sections of the diffuser.

Mercedes plays the longer game
While the resurgence of Ferrari over the last few races has added to the spectacle and brings us hope of a better or closer end to the 2019 season, Mercedes is already eyeing gains it may be able to make for 2020.

The regulations will remain relatively stable for 2020, but we will see a change from Pirelli in how the tires deliver their performance and teams will have to adjust accordingly. With this in mind, Mercedes, which has been at the forefront of hydraulic suspension elements since before the hybrid era, has begun testing a revised ‘heave’ element.

Red Bull slips off the pace

Although magnified by Ferrari’s sudden turn of speed, Red Bull has fallen back to third place in the pecking order – despite races at tracks where it was expected to excel and repeat its form before the summer break.

Red Bull has fallen a little behind its rivals partly due to the power unit penalties, and partly due to the rate of development being made around them. However, in Singapore the team applied an update of its own, reproofing the leading edge of the bargeboards and exposing the splitter to more flow.