The first of its successes came on this day 32 years ago when Alain Prost triumphed in the Brazilian Grand Prix. Here we look under its skin at the tech secrets that help make it such an F1 icon.

If we look through F1's history books, we can see fleeting moments where the stars align and suddenly one team has every ingredient needed for the winning recipe: an insanely talented driver pairing, the ideal design personnel, and management structure, and unparalleled engine and a flawless chassis.

In 1988 McLaren had it all, a brilliant cocktail that helped it deliver one of the most dominant cars the sport has ever seen.

That's not to say it wasn't prepared, as the arrival of Honda as its new engine partner, had spawned the MP4/3B - a test mule that housed the Honda engine and was used to develop both the engine and car for the 1988 season.

But, with just four months to the first race of the season, the MP4/4 did not exist. And that's not just like a car: it didn't exist as a finished drawing either.

An extremely tight schedule prompted a no-nonsense approach, with not one aspect of the car able to take precedence over the other, as McLaren looked to create a totally solid all-rounder. 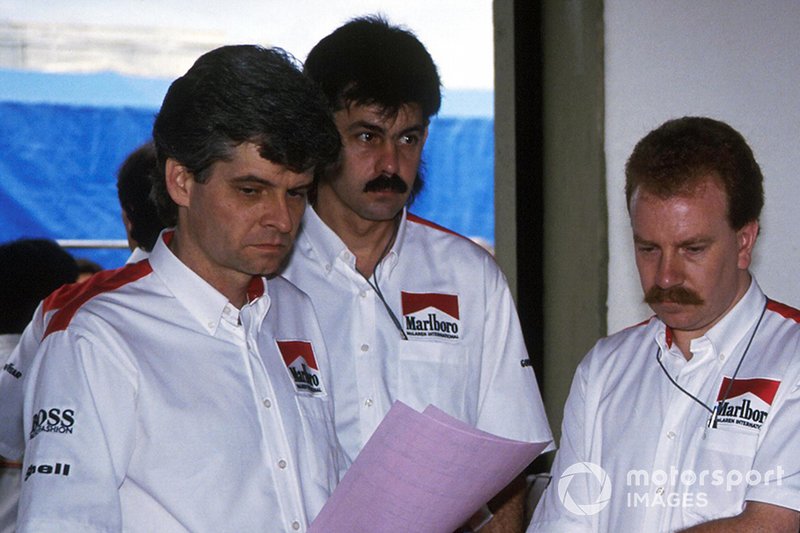 Outside the walls of McLaren, a debate still rages as to who designed the MP4/4, as Gordon Murray's arrival from Brabham in the wake of John Barnard's move to Ferrari had seen Steve Nichols fill the management vacuum.

Looking at the lineage of cars during that era, it's clear to see that McLaren, much like the rest of the field, had already taken note of Murray's low-line design and also started to recline its drivers in the cockpit.

And, whether by the natural evolution of the McLaren challenges during this period or the fact it now had Murray on its side, it was clear to see the BT55's substrain of DNA within.

But new regulations requiring drivers' feet to be behind the front axle, and a reduction in the size of the fuel tank, meant McLaren would be able to push things further still for '88. 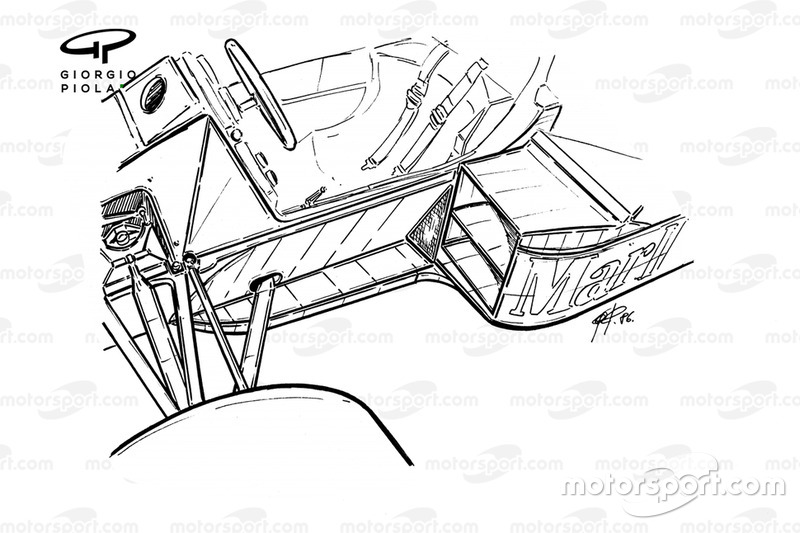 A decision was also taken to move away from Barnard's tradition of a V-shaped monocoque (seen here in 1986's MP4/2c) in favor of vertical sides that led to a flat floor. This not only had aerodynamic benefits but also vastly improved the car's torsional stiffness.

Allied to this was McLaren's use of its autoclave, which had arrived at great expense but allowed the team to bring manufacturing in-house.

Hercules Aerospace had been instrumental in McLaren's first full carbon fiber monocoque, introduced with the MP4/1, but with this car, it would only supply the prepreg materials.

McLaren, short on time, bucked the trend with the design and manufacture of the monocoque, as whilst most of the grid had shifted to using a female mold, McLaren continued to use male tooling. 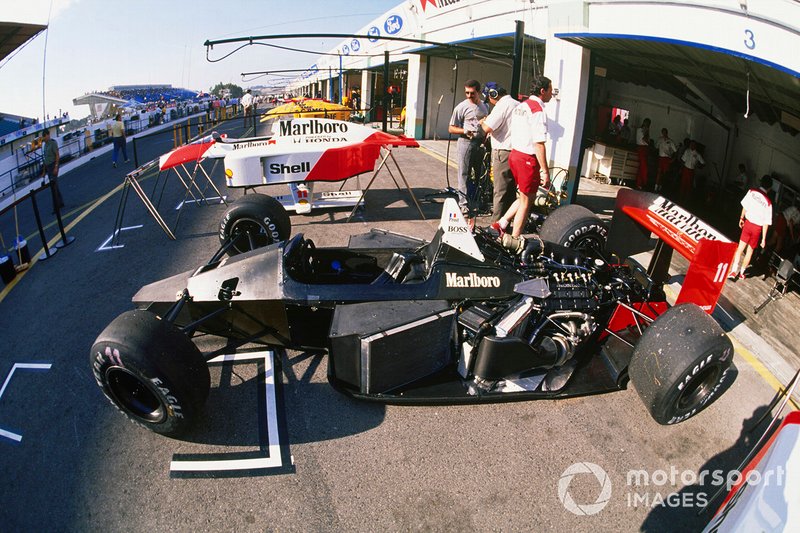 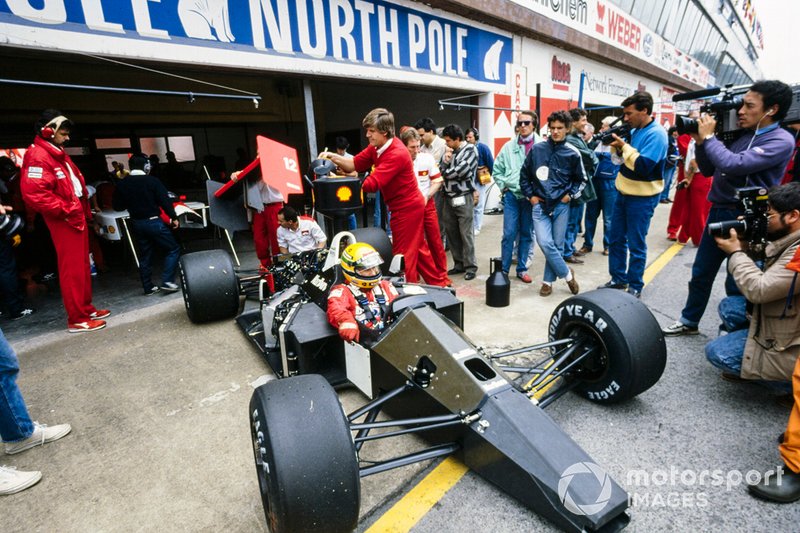 This meant it could adapt its bodywork quickly if it made a mistake or found a development wiggle room. It also meant that, with a flat panel approach, it could have a strong benefit over those using a female mold, as McLaren could use unidirectional carbon fiber fabric as part of its production methods.,

The last piece in the monocoque jigsaw puzzle was the drop-in structure referred to as the bathtub. Essentially it made up the entire cockpit region of the seat back bulkheads, dashboard, and side panels. It was to be made up of one piece and would further improve structural integrity and torsional stiffness.

The bathtub's quality improved over time but the process behind its construction always left it with a less than desirable fit and a slightly different color to the rest of the monocoque. 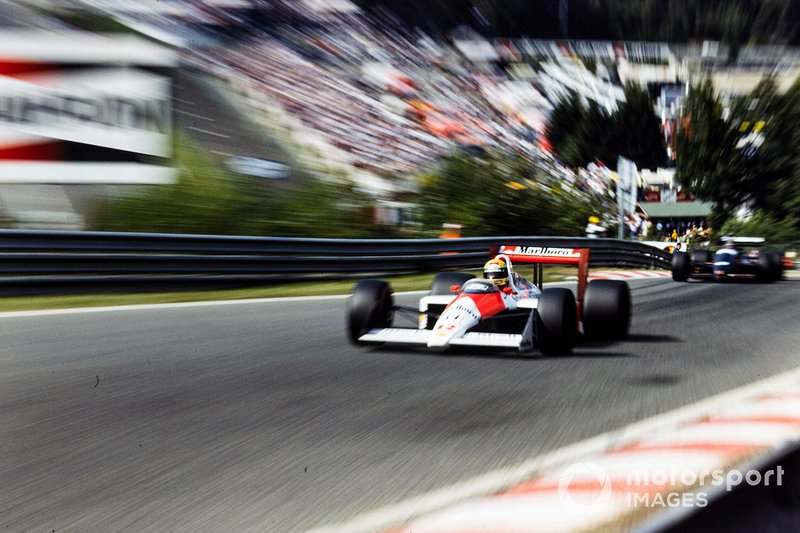 Not being led by one dominating factor, the MP4/4 had no stand-out features when it comes to the car's aerodynamics, an oddity when we consider its modern counterparts.

Nonetheless, the car did feature three distinct aerodynamic configurations throughout the season, so that it had the flexibility to overcome the challenges of a given circuit, which we will see in the gallery later on.

The design team had also literally flipped the script when it came to its sidepod design, with the Barnard style top outlet now to the side of the car, as seen on the MP4/1c below. 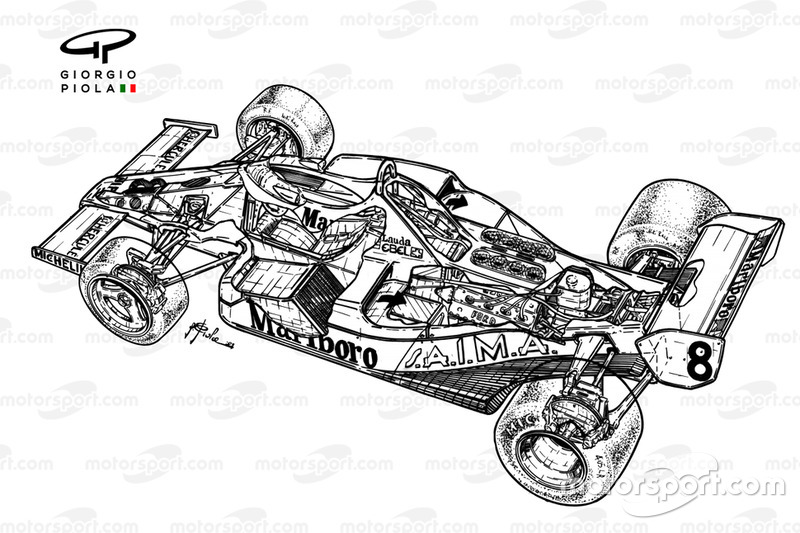 Senna's arrival from Lotus also saw the team make the switch to Honda, who would supply it with the 1.5-liter turbocharged engine it had been developing and would continue to supply to Lotus.

Delivering in the region of 700bhp, the RA168-E was a new design that was not only extremely powerful but also very fuel-efficient and, even by modern standards, incredibly reliable.

The RA168-E was designed as a result of the FIA's desire to reign in the turbocharged engines and restore some parity with their naturally aspirated brethren.

The 1988 regulations capped boost pressure at 2.5 bar, rather than 4 bar, whilst the total fuel at their disposal was reduced from 195 liters to 150 liters. The turbo runners were also handed a minimum weight handicap of 40kg over the 'atmos' cars, who were also allowed to carry 215 liters of fuel.

To recoup any potential losses, Honda worked on a special fuel blend with Shell to avoid premature detonation and required the fuel to be preheated, such was its exotic aromatic hydrocarbon content.

This potent mixture helped to deliver a broad torque band that made the car much easier to drive than the now diminished turbocharged field and still provided an advantage over the 'atmos' cars. 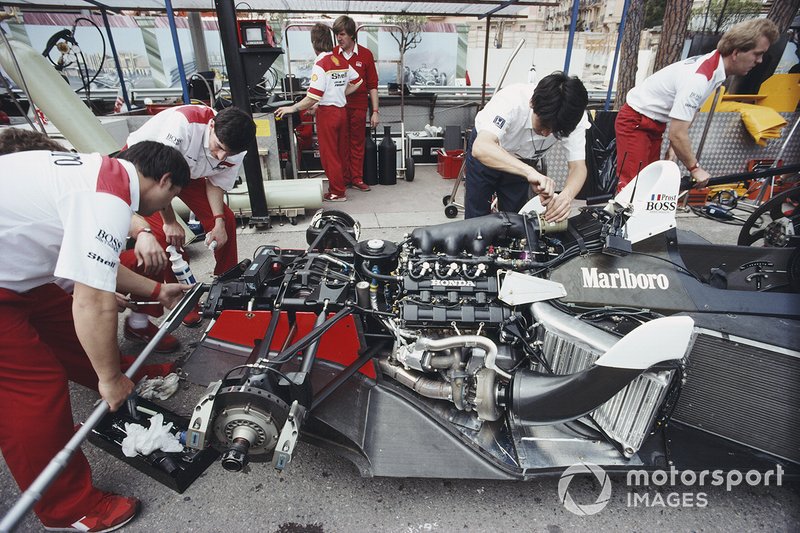 Mechanics work on the McLaren MP4-4 Honda of Alain Prost

The Honda engine featured a low crankshaft and was paired with a small clutch that had been developed by Tilton during 1987 for Lotus.

The Tilton carbon clutch measured just 5.5" in diameter and, whilst everyone else struggled on with 7.25" diameter clutches, the Tilton gave for superior heat management, smoother engagement, low inertia and high torque capacity that helped McLaren to deal with demands of the Honda engine.

With such a low crankshaft and small clutch, some lateral thinking was required when it came to McLaren's gearbox design.

They decided upon a triple shaft arrangement that would allow them to keep the engine as low as possible and not adversely affect the driveshaft angles, an issue that Lotus, by comparison, tried to overcome by slightly tilting the engine upward while using a two-shaft gearbox arrangement.

The design of the gearbox, like Honda's engine, paid particular attention to the oil system, both of which used dry sumps to improve temperature control, reliability, reduce windage and tolerate the huge g-forces exerted on the car. 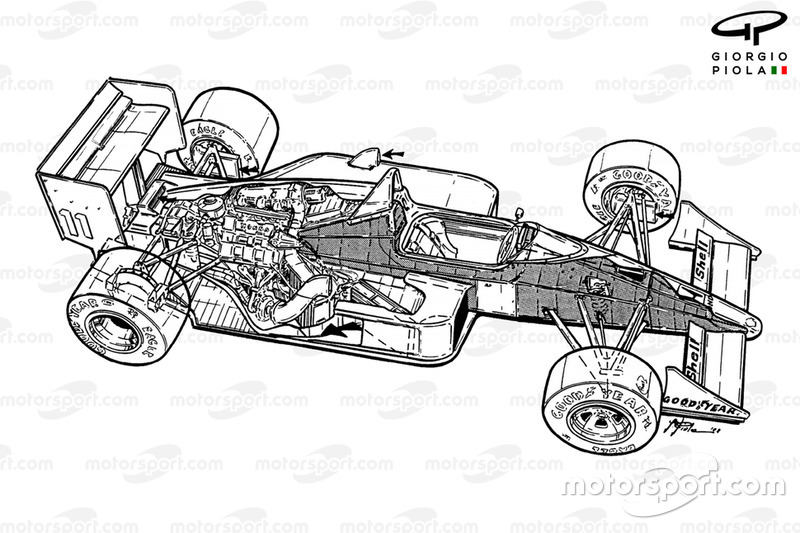 The MP4/4 is, without doubt, an era-defining machine and one of the most well-rounded cars to have ever graced the sport. Conquering all that dare oppose it, it provided a fitting end to the sports first foray into turbocharged machinery.