Renault's mass damper is a typical example of Formula 1 teams using their ingenuity and lateral thinking to find a way around a problem and then exploit it even further.

The Enstone-based team had found the rules introduced for 2005 required it to run an excessive amount of front spring stiffness to keep the front wing as close as possible to the ground.

This was the sort of mechanical trade-off that teams typically make to try to find aerodynamic performance. However, this set off an unwanted bounce effect when the car was in pitch, and so a push was made to try to find a way of counteracting its effect.

Cars of this era were able to make the weight limit relatively easy when compared with their modern counterparts, and so often ballast was carried to bring the car up to the minimum weight. This gave Renault license to install its mass damper - a free moving weight suspended within a cylinder inside the nosecone that would act in opposition to the vertical forces applied to the car.

The benefits of such a device clearly had to exceed the additional weight that was being carried, especially as one of the drawbacks was its location: with ballast usually cited at the lowest possible point on the car.

Nonetheless, extensive tests on the team's 7-post shaker rig had already confirmed that a lap time gain was possible, and so it put it into production. Renault immediately found that the mass damper would not only settle the car, but also allow their drivers to attack the kerbs much harder, giving a more compliant ride and a more stable aerodynamic platform.

The team initially used a weight of around 10kg but swiftly realised that this could be customised for each circuit, with various weights used in order to get the best from the car and latterly added a mass damper at the rear of the car too. 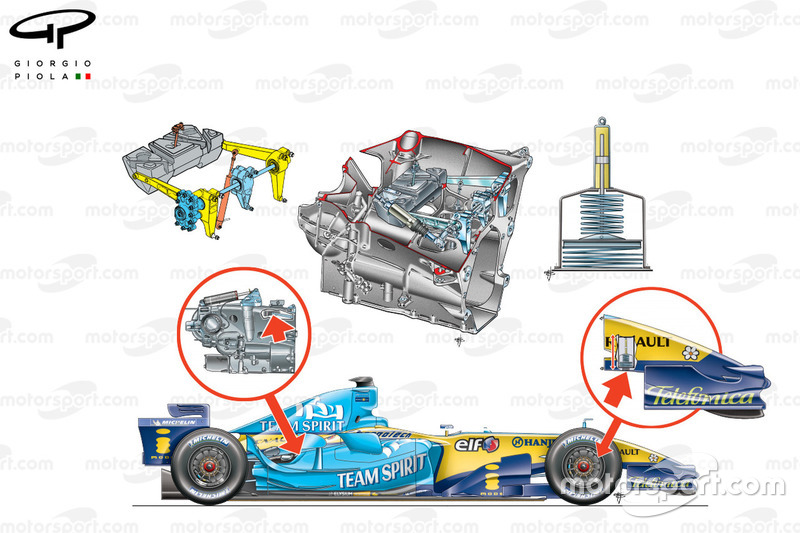 During this era of F1, there were two tyre suppliers - Bridgestone and Michelin, of which Renault was supplied by the latter. This was even more of a coup for Renault as it's understood that the Michelin tyres were more receptive to the use of the mass damper, as the tread block tended to move around more when exerted.

That wouldn't stop others attempting to make similar gains though, as whilst Renault may have been the first, others quickly followed suit. In fact, most of the field started employing them to a varying degree of success and with ever-more complex modality and weight.

In the end, the FIA used its catch-all regulation that outlawed 'moveable aerodynamic devices'. It cited an escalation in development of the devices which had highlighted that their primary purpose was no longer to provide additional mechanical assistance but instead was being used to markedly improve the car's aerodynamic output.