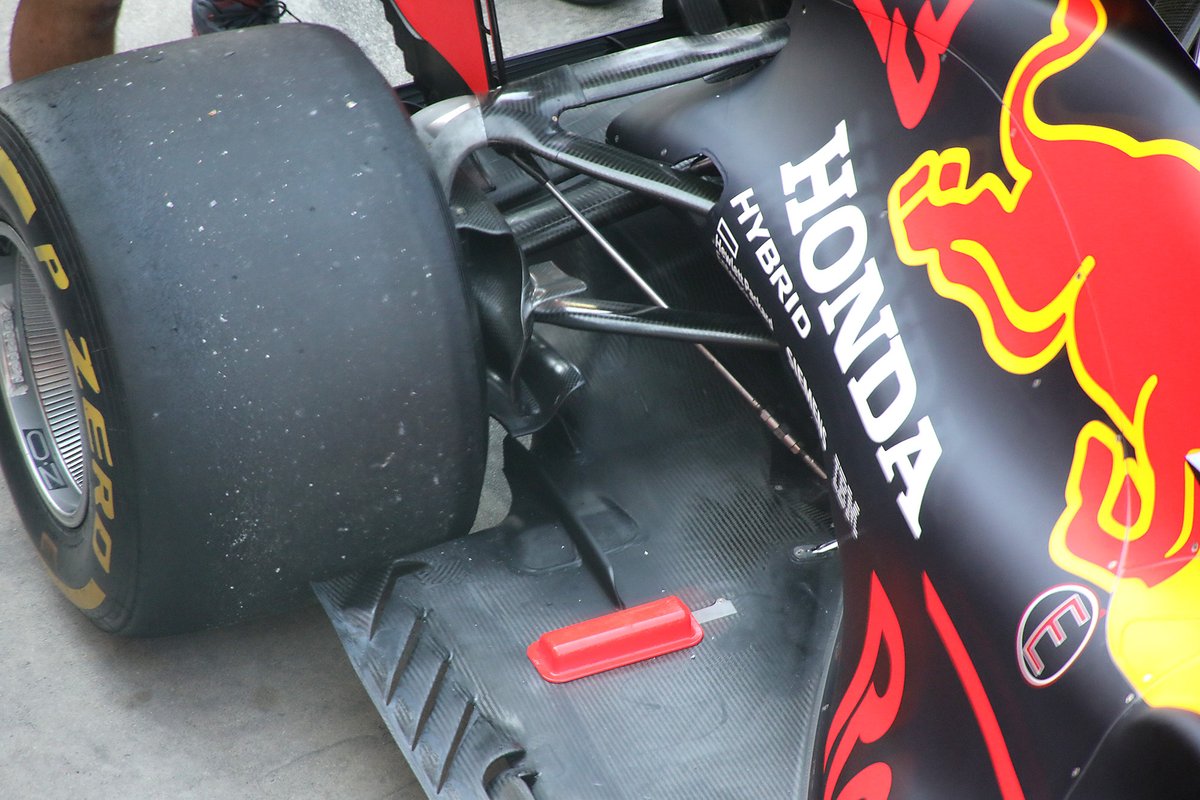 This shot has a wealth of detail, as not only do we see the angled holes ahead of the rear tyre, the rear suspension and the very narrow bodywork on the RB16, you’ll also note a bulge around the floor strake beside the rear tyre. This houses the equipment and logging medium for the row of kiel probes that are hidden beneath the red box so they don’t get damaged as the car is moved around the pitlane. 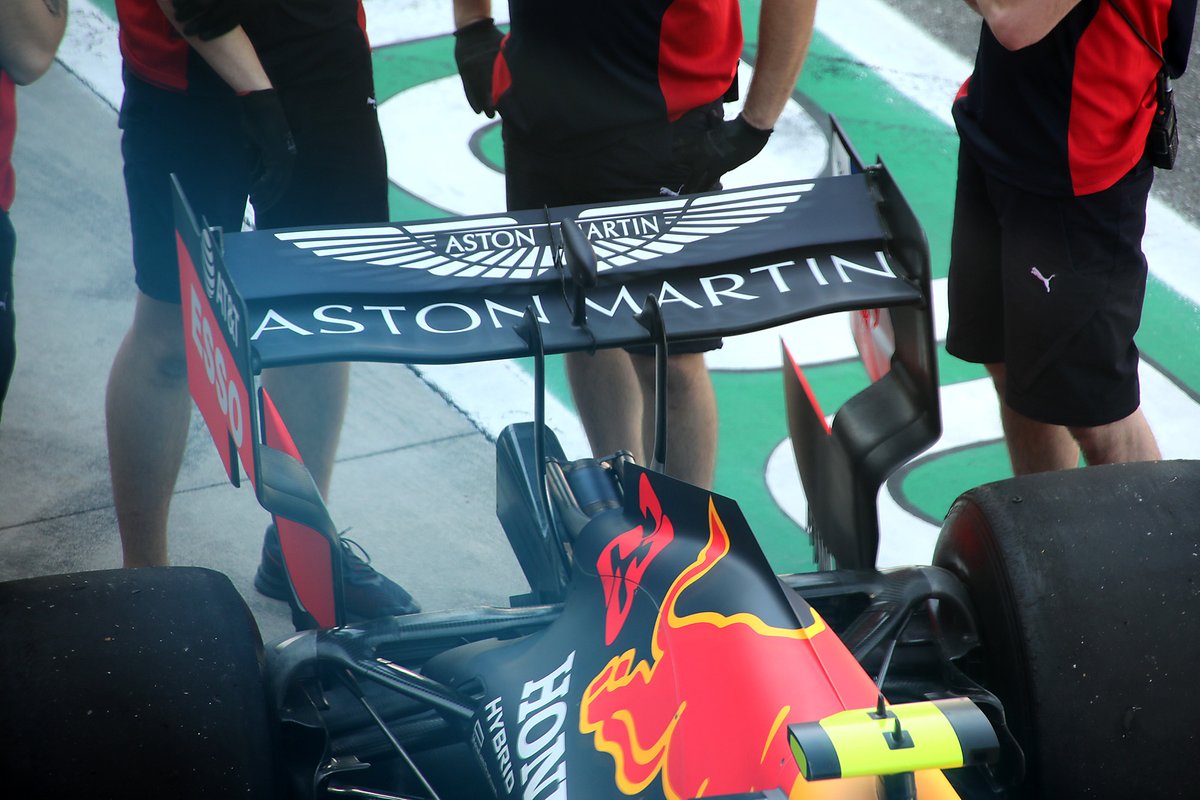 The extremely low downforce version of Red Bull’s rear wing is similar to the one used last weekend at Spa but the mainplane angle has been reduced further still, while the upper flaps trailing edge has been cut down and no longer has a Gurney flap. 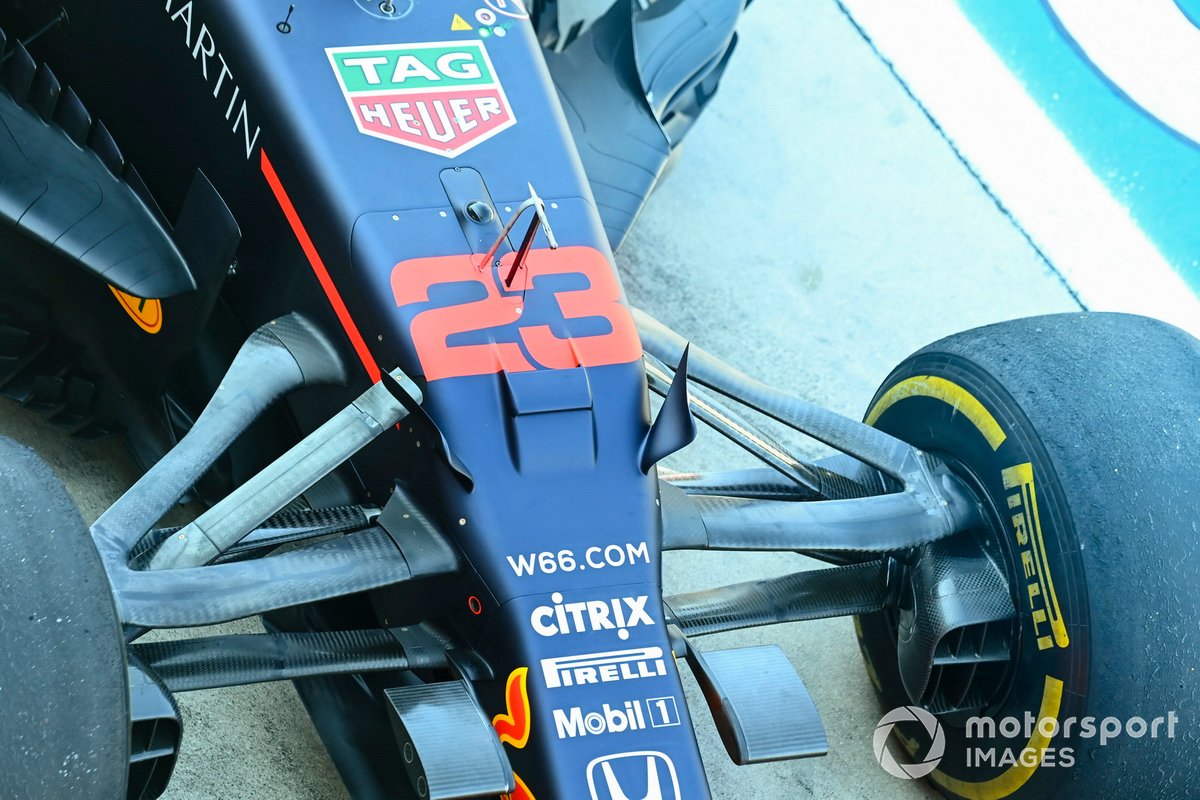 An overview of the RB16’s novel front-end arrangement, complete with the steering assembly being placed much further back and the use of a very narrow ‘S’-duct outlet. 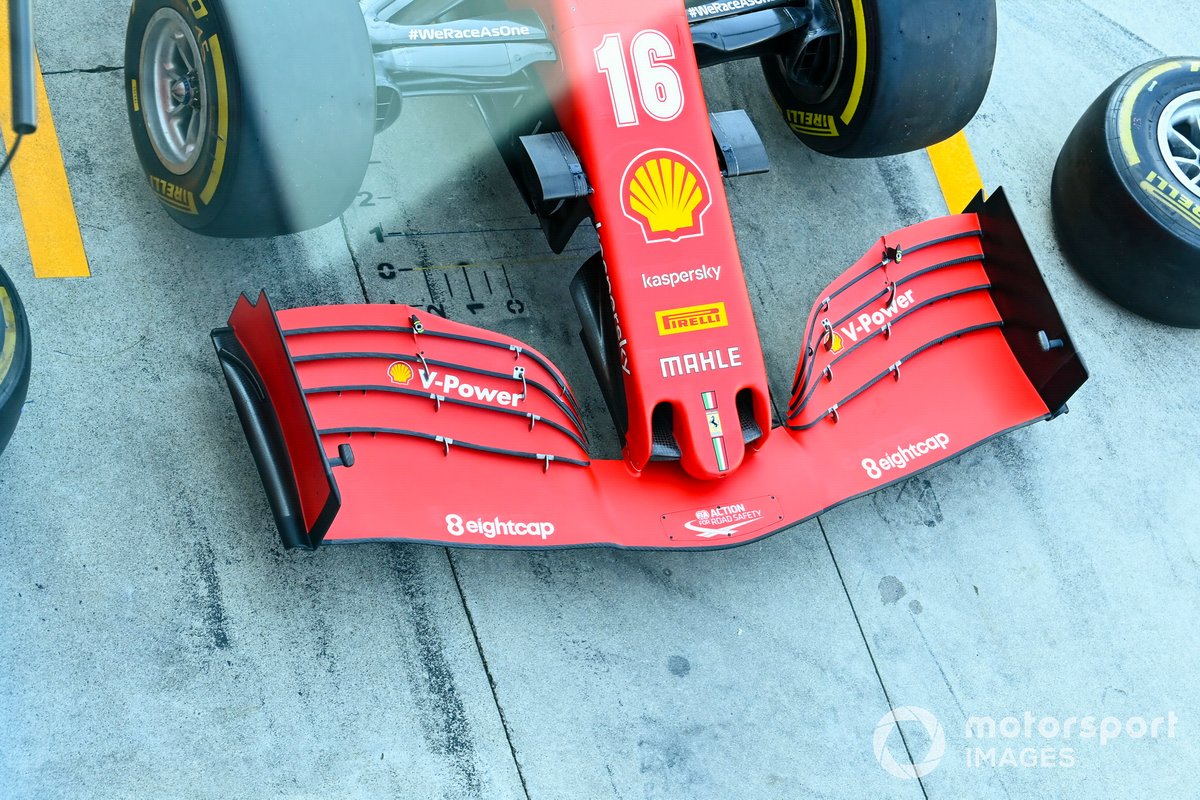 Ferrari’s front wing features a very slim upper flap at the inner section to trim the balance of the car in accordance with the level of downforce being used at the rear. Also note, that while most of the field are trying to narrow their noses and use the space that’s left over to create an enlarged cape, Ferrari has not. It retains the thumb-tip style nose, with a short cape and turning vanes in behind. 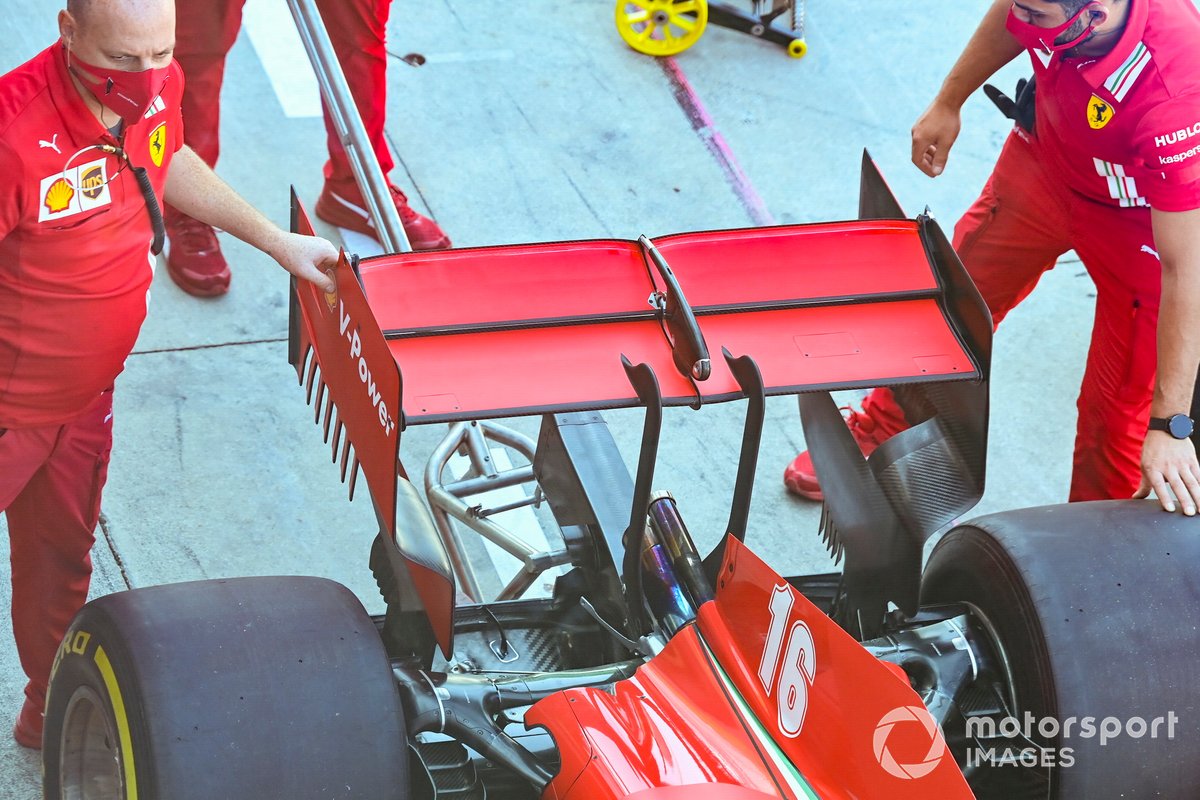 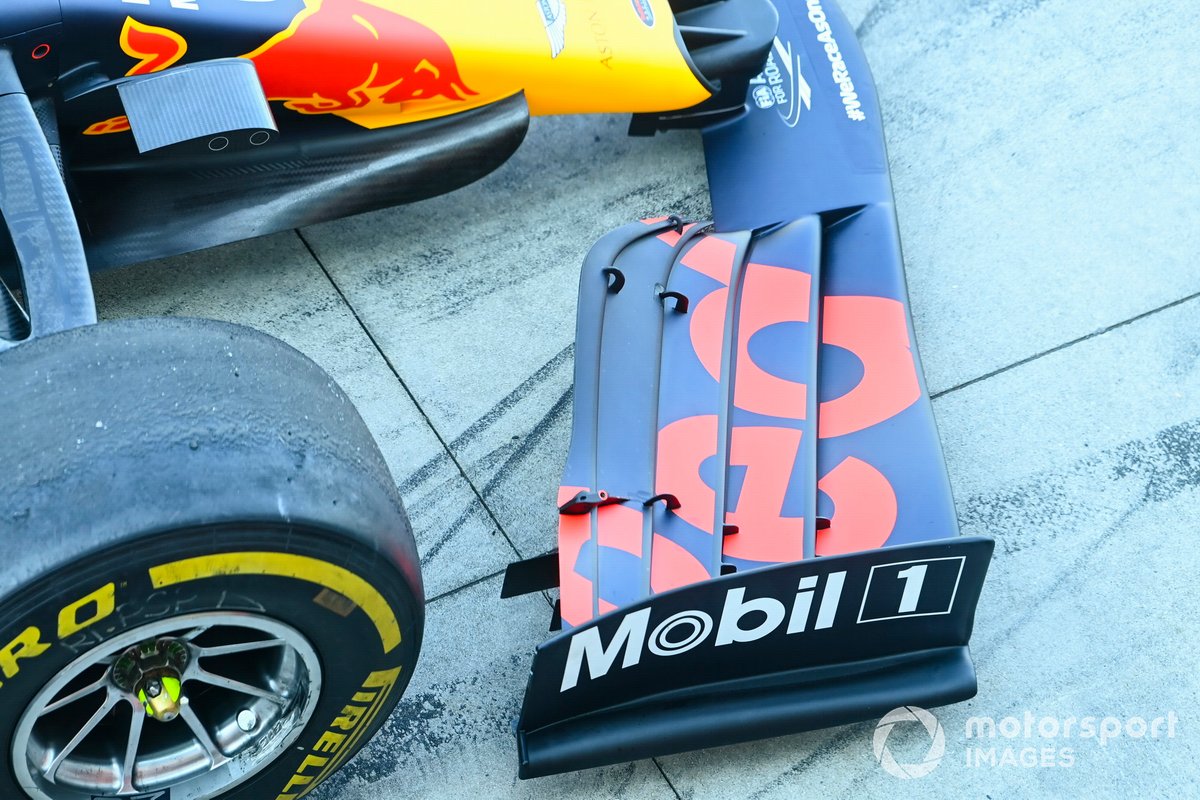 This view of the RB16’s front wing shows how much of the upper flap has been cut back in order to reduce the downforce being generated and balance it against what’s being created by the rear wing. You’ll note that this almost ad-hoc approach has seen the trailing edge pared back to the wing adjuster and results in some of the vinyl lettering on the wing being incorrectly spaced. 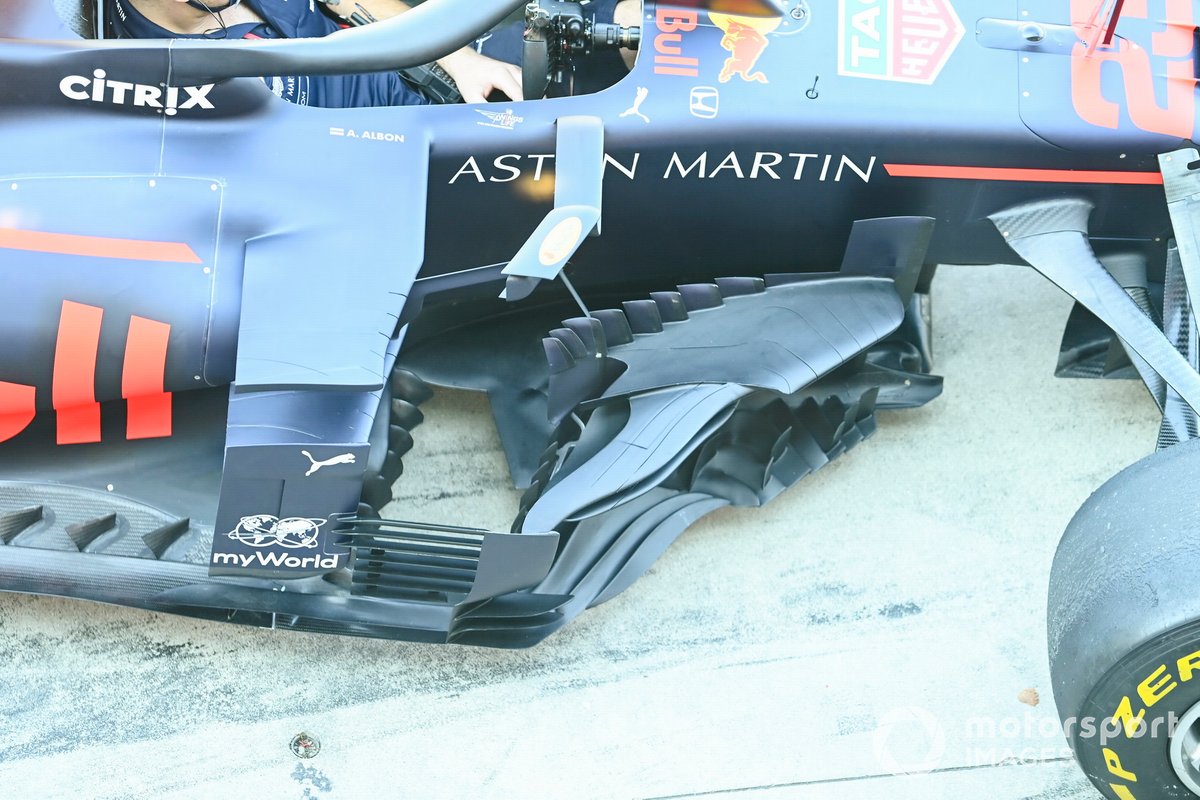 Top-down overview of the bargeboard region on the RB16 and what you’ll note is how each tier above the reference plane also has slots in the surface that correspond in order to maintain legality. 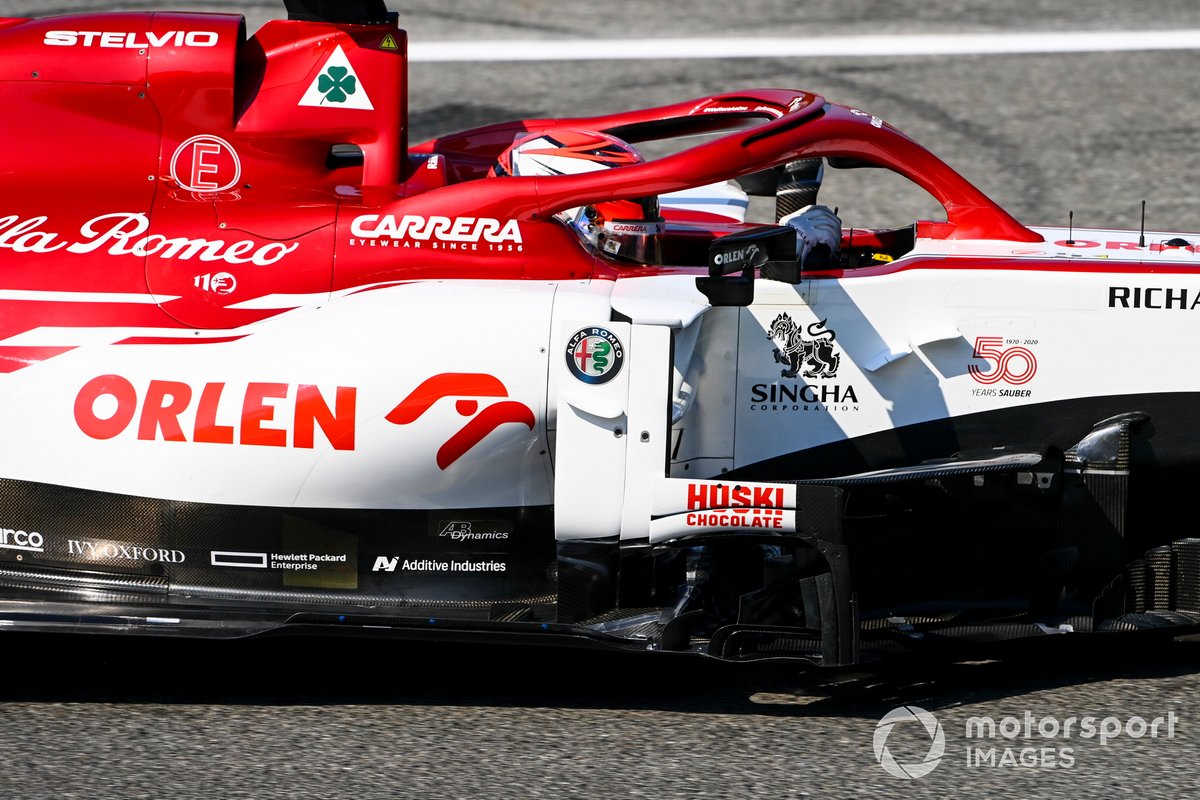 Side-on view of the Alfa Romeo C39 and the bargeboard and deflector solutions, the former of which has been modified as of late as the team just look to rekey some of the aerodynamic structures as they pass down the flank of the car. 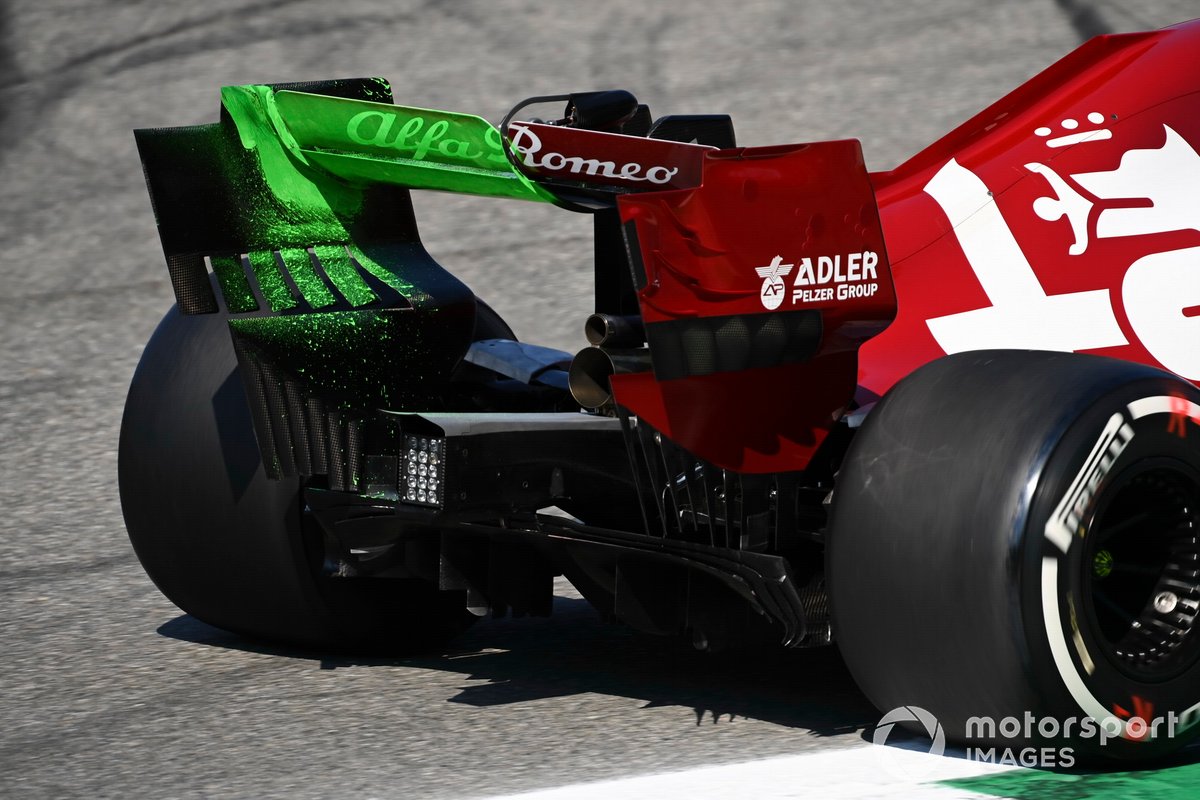 At the rear of the car, flo-viz paint is applied to the Monza specification rear wing to make sure it’s performing as anticipated, as while it was briefly tested it at Spa the actual conditions at Monza are a little different.

Looking at the wing from the front the team has a very unique design for the mounting pillars, with the upper surface almost lopped off when compared with the design they usually favour. 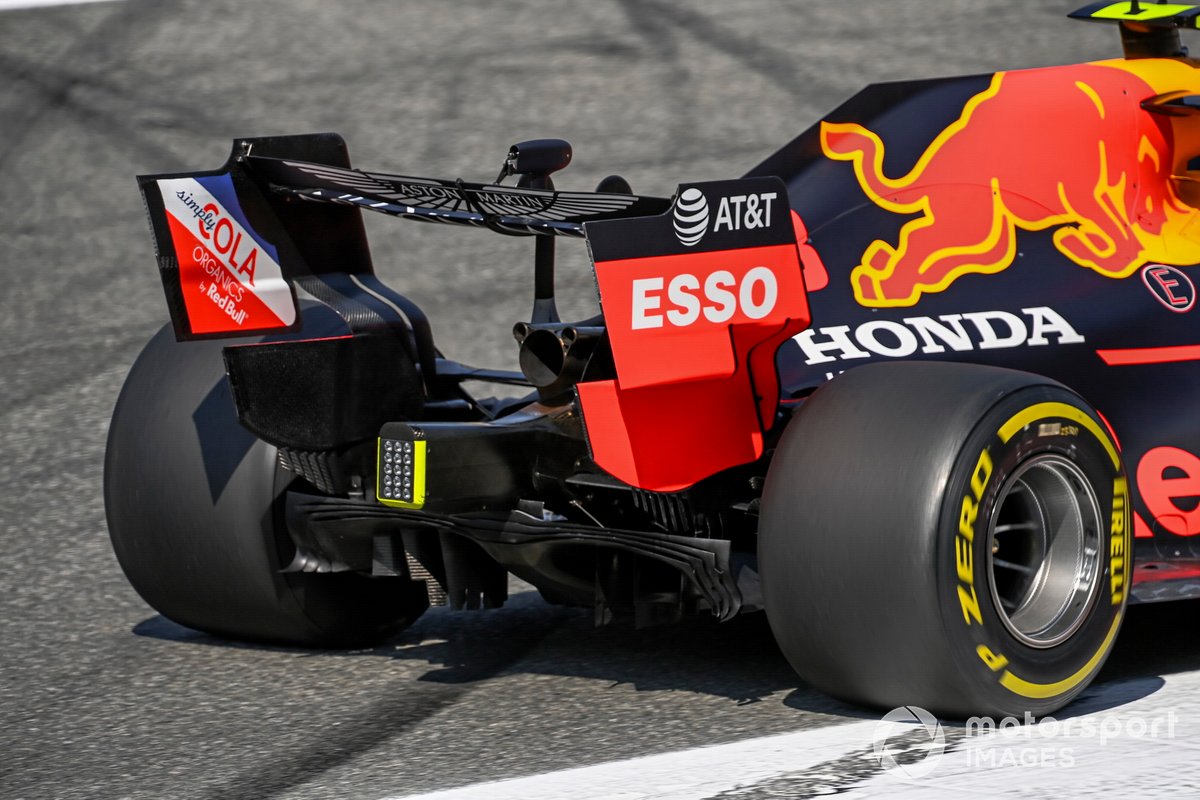 This rearward shot of the RB16 perfectly illustrates just how little angle that the team has on the rear wing this weekend. 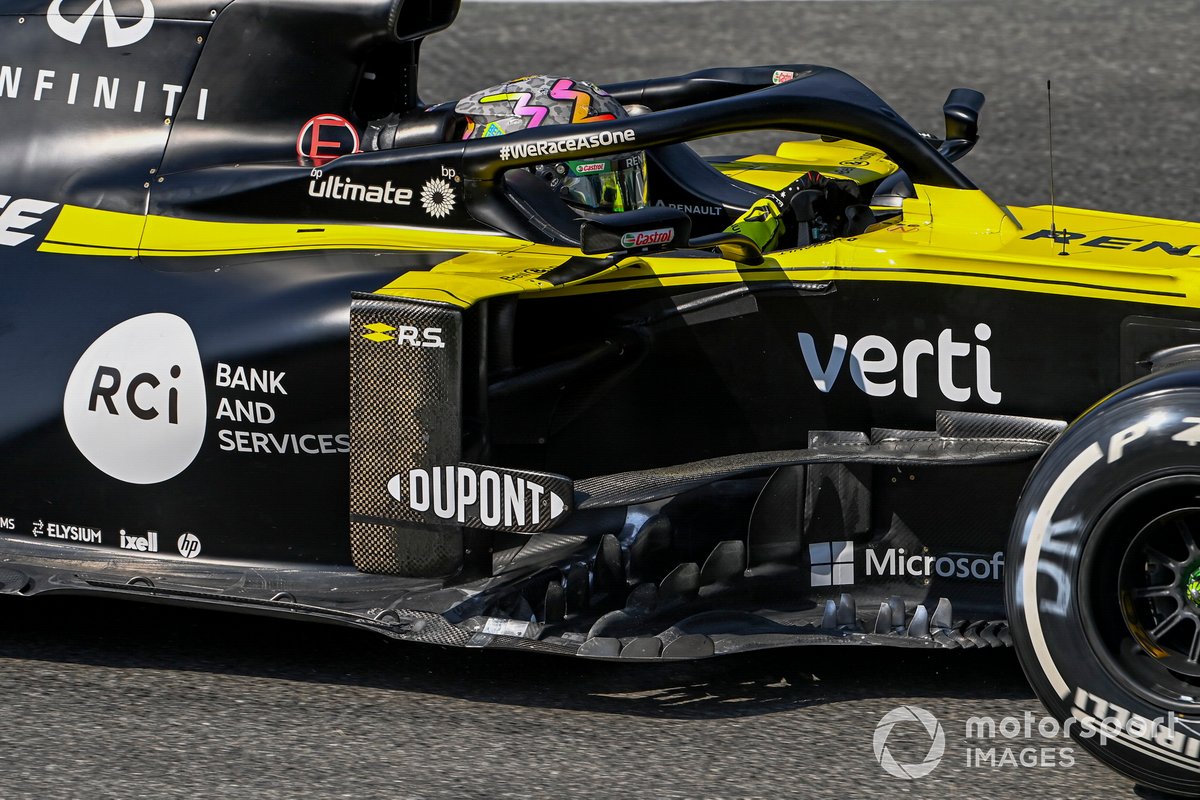 The bargeboard and deflector region on the Renault RS20 with its various hedgehog-like surfaces. Appears the team also had more data gathering equipment on the car, the telltale sign being the wiring on the side of the chassis leading into the cockpit.

Flow-viz paint on the rear of Nicholas Latifi, Williams FW43 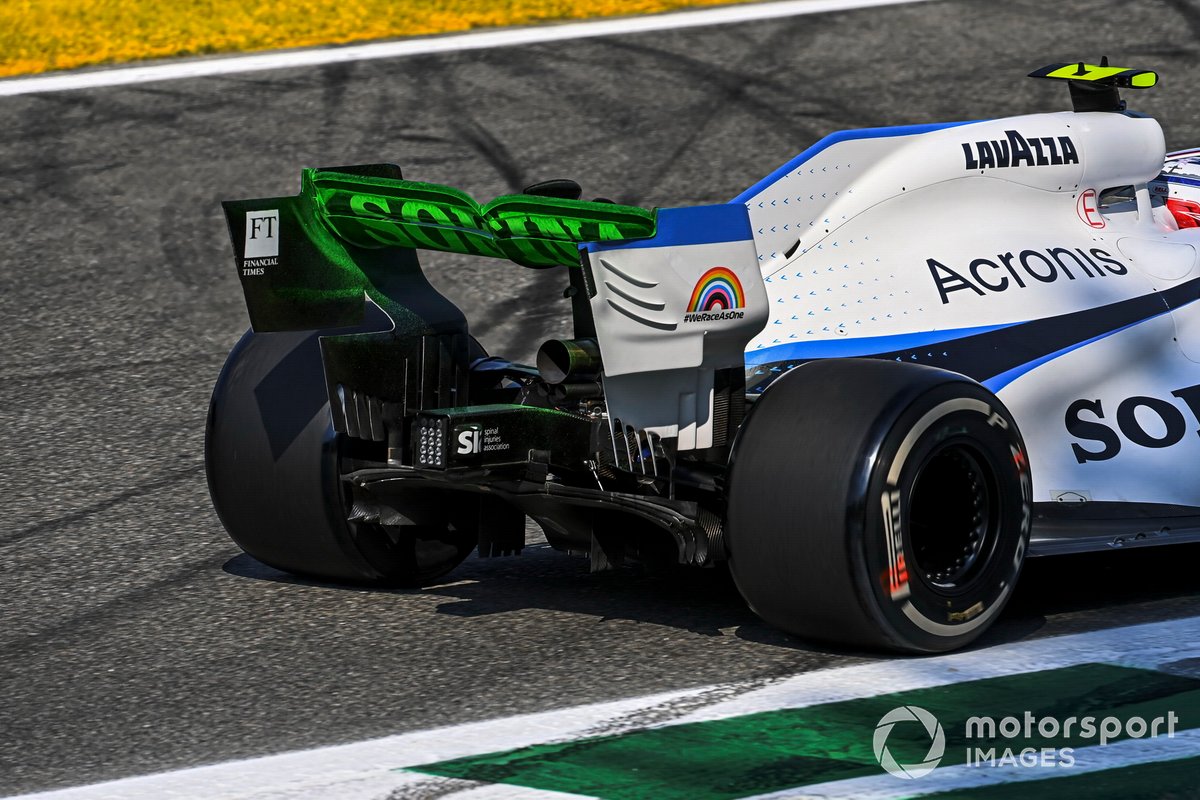 Williams also painted flo-viz on the rear wing of Nicolas Latifi’s car as they looked to get visual confirmation of how the wing is performing around Monza. 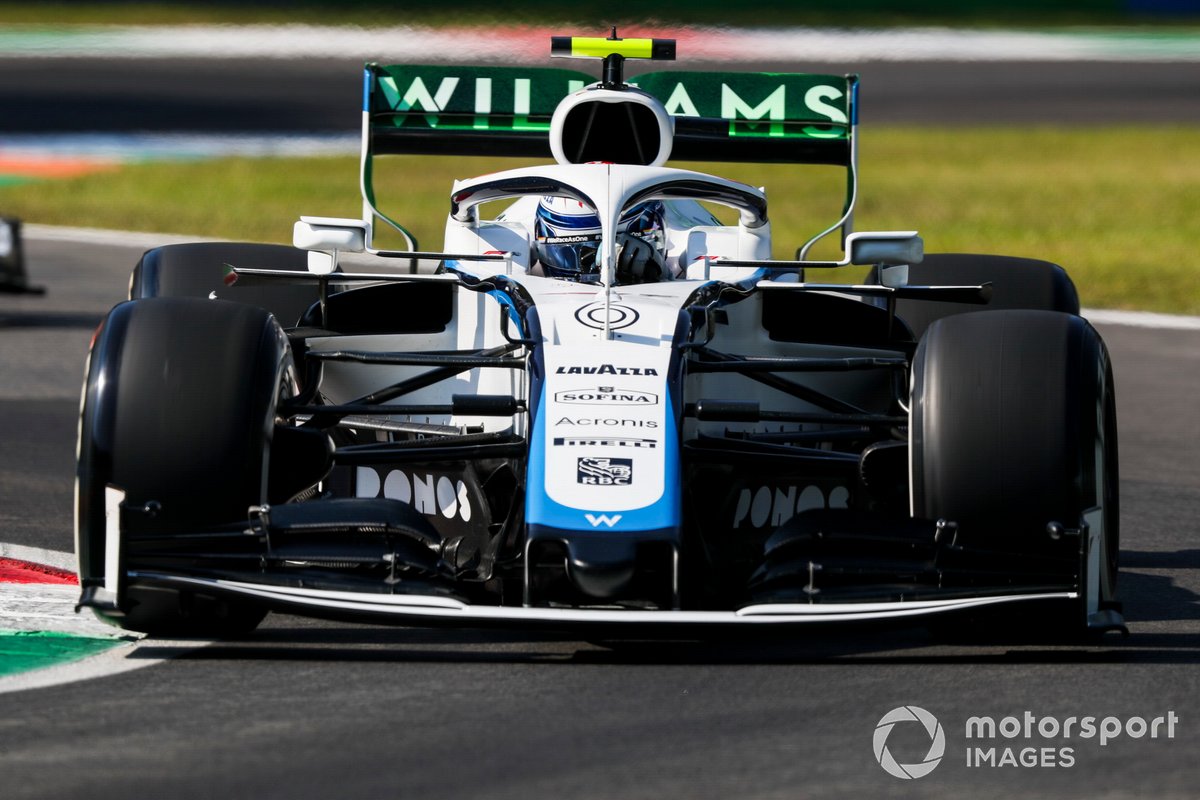 The forward view of Latifi’s car which confirms he was using a lower downforce rear wing when compared with Nissany who subbed in for George Russell in FP1. You’ll also note he only has the one chassis canard on his car too, on the left-hand side (right as you’re looking at it).

Pierre Gasly, AlphaTauri AT01 spins into the gravel 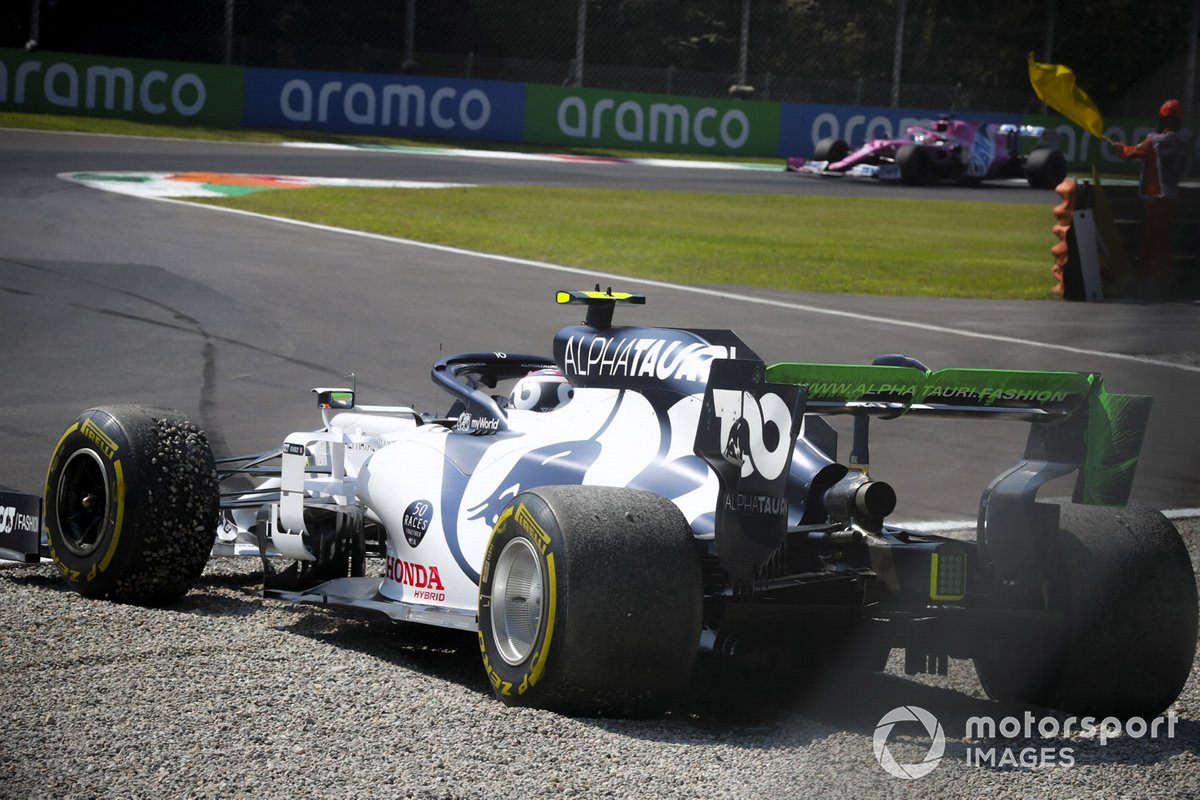 Gasly, having taken a trip through the gravel, presents us with a shot of the flo-viz on his rear wing. 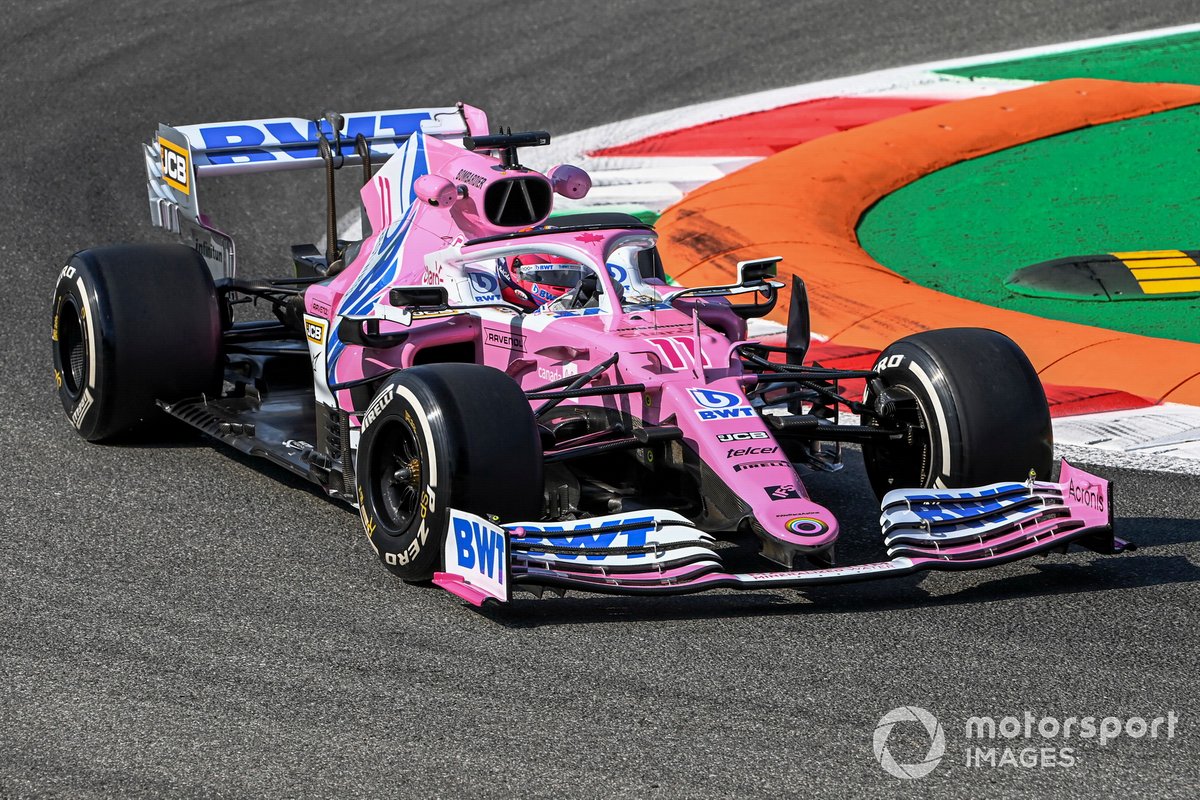 Sergio Perez at the wheel of his Racing Point RP20 tests out the lower downforce rear wing, which has a shallower angle of attack this weekend and no Gurney on the trailing edge. 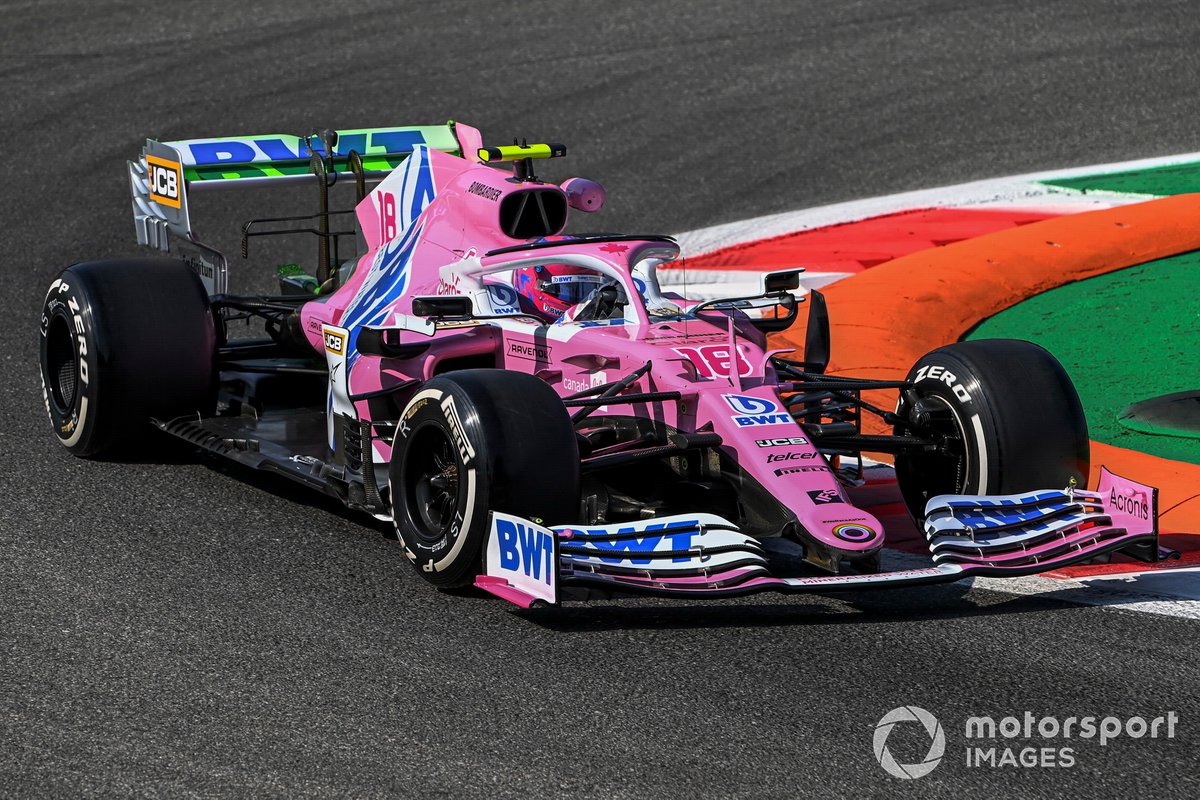 Lance Stroll completes some laps with a T-Wing mounted on the rear of his RP20, supplementing the lower downforce rear wing. 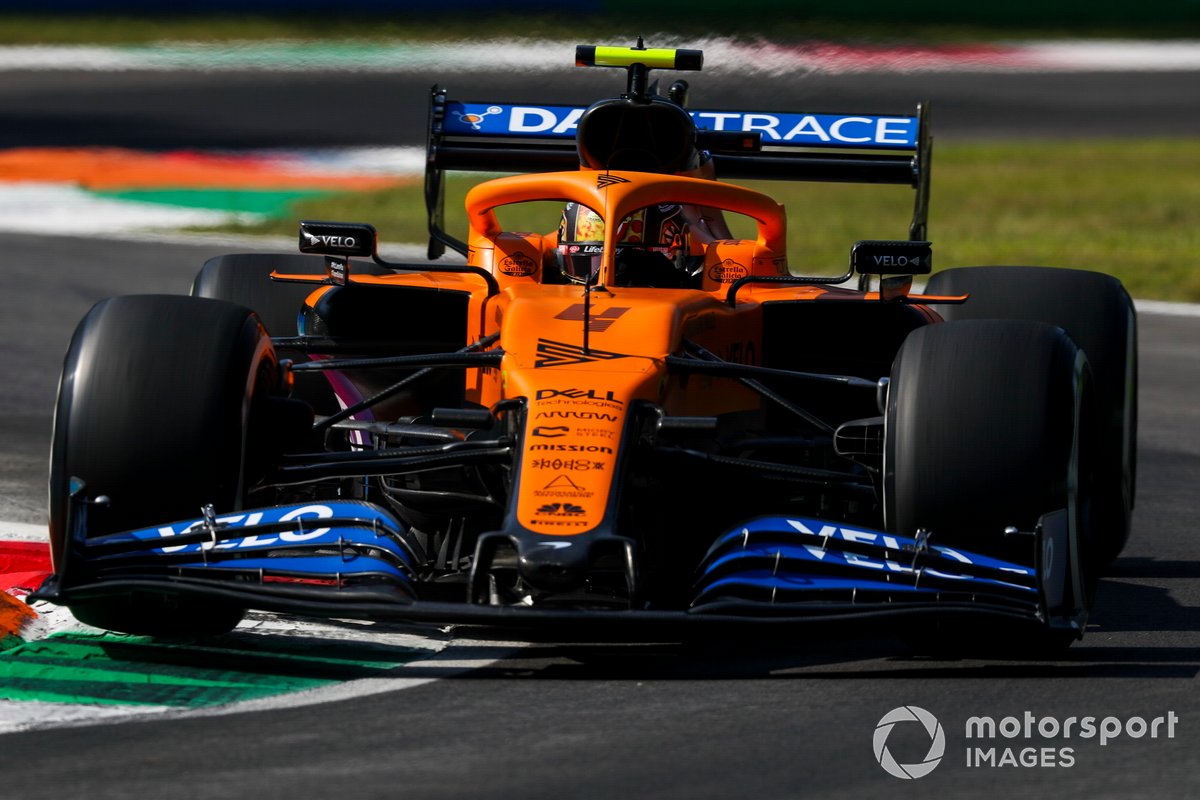 A relatively simple low downforce rear wing for McLaren at Monza, as the team prefers not to chase complex rear shapes like some rivals. 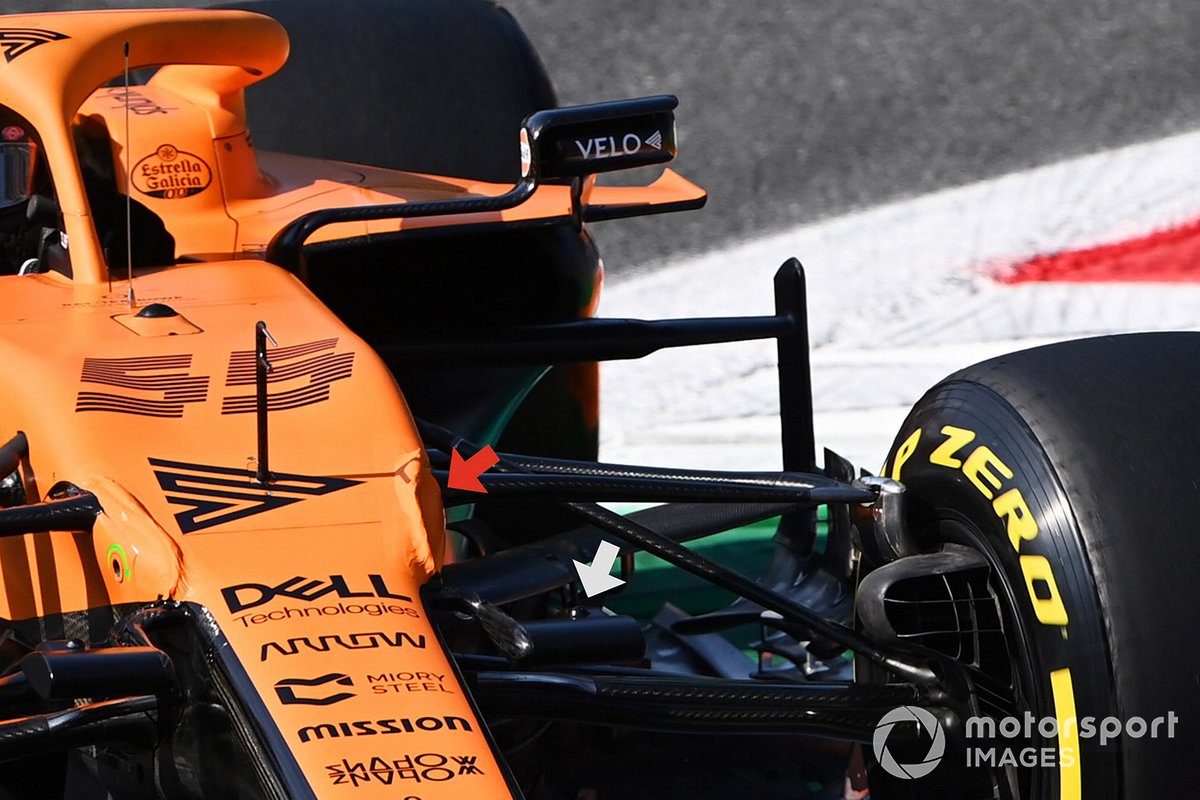 McLaren briefly ran with some additional components within the front camera pod housing, likely capturing hi-speed footage to monitor flutter (white arrow) with the giveaway of their installation being this cabling shrink wrapped to the chassis (red arrow). 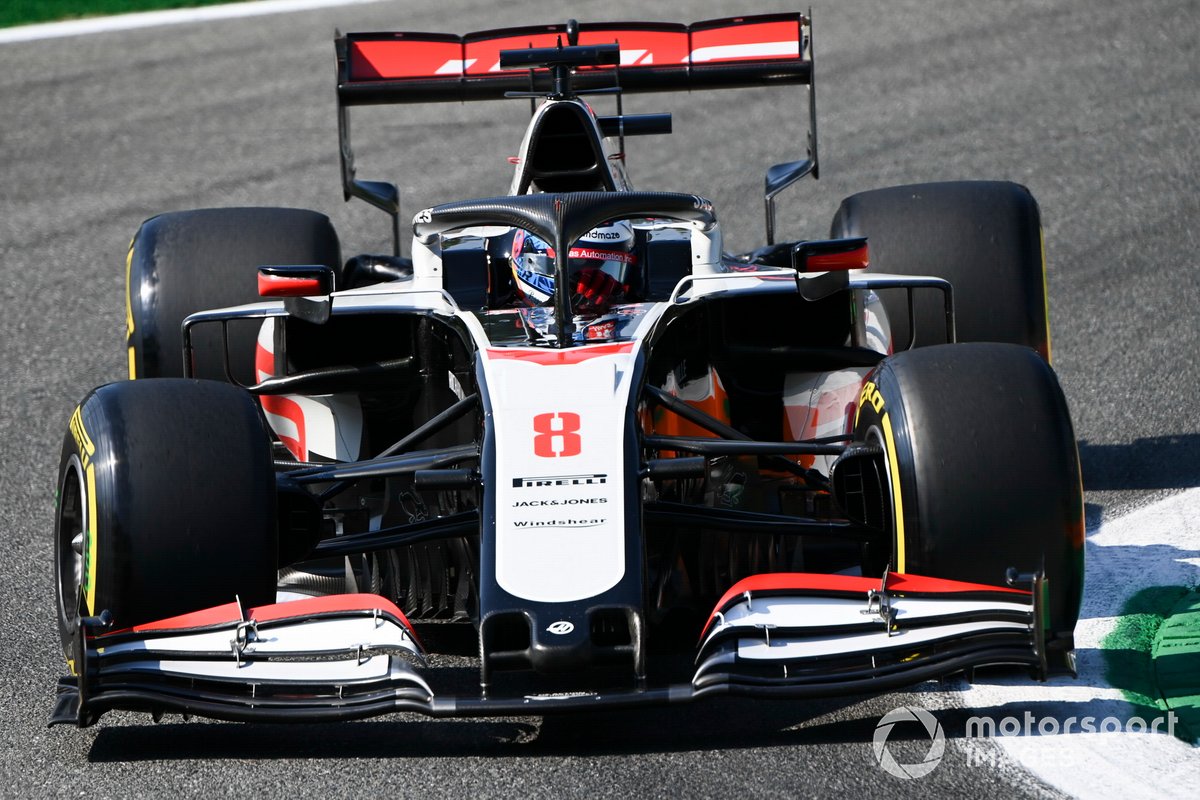 The low downforce rear wing favoured by Haas, with its bow tie style trailing edge to the upper flap, as it sweeps down to meet the slot gap separators. Also note the amount of front wing angle taken out by the difference between the wing angle of the outer and inner sections displayed near the adjuster.
Carlos Sainz Jr., McLaren MCL35 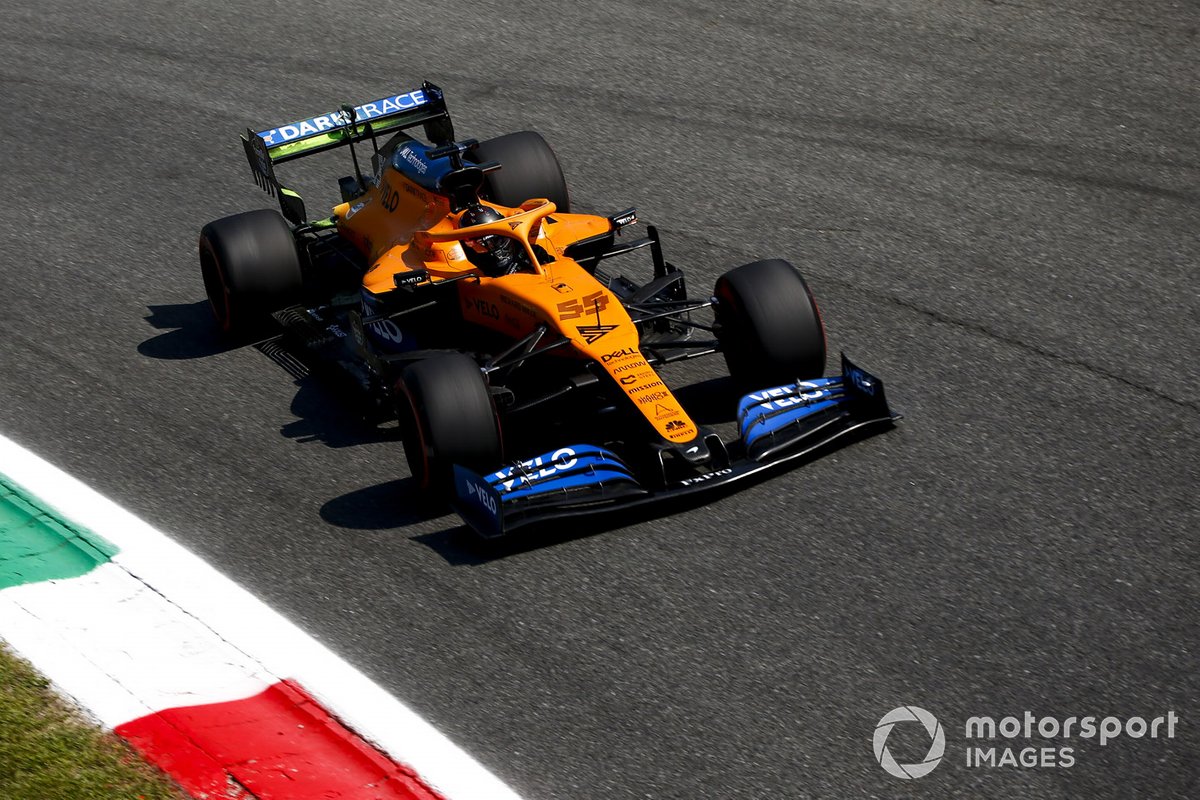